What was the inspiration behind Respira Labs?

I was motivated by my grandmother’s death from Chronic Obstructive Pulmonary Disease (COPD). [The lung disease COPD is characterized by chronic, semi-permanent obstruction of airflow through the lungs that interferes with normal breathing].  I come from a family of four physicians (my parents and my sister). My grandmother, Sylvia, lived 6 hours' drive away. It was tough to monitor her from afar and she died at the hospital after being admitted for an exacerbation. This was incredibly difficult for me and a pivotal event in my life. I was completing my UChicago plastic surgery residency, and already having doubts about my future there, so I decided to change course. I re-trained in public health (UWashington) and translational medicine (UCSF and UC Berkeley) intent on creating technological solutions for major health problems like COPD. I wanted my life to have more meaning than just operating on individuals. There are many talented surgeons, but few physicians spearheading medical technology innovation. I wanted to be that person. I began to ask questions about my grandmother’s disease and death, and I learned that COPD sufferers have trapped air in their lungs.  If we could measure this phenomenon, doctors would be better able to correctly assess their patients in a timely manner.  I also married an incredibly talented engineer; my husband, Ricardo Garcia,who is the Technical Lead for Audio Experience at Android/Google.  In 2018, he taught me how to build a prototype and run some tests; it worked and I filed patents. I call the technology Sylvee, after my grandmother. 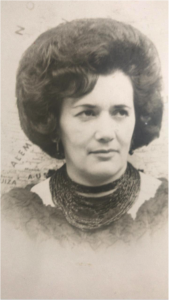 Maria’s grandmother, Sylvia, an educator who founded the first K-12 school in Bogotá’s poorest district. She raised 5 kids alone and later became a director of engineering, a surgeon-entrepreneur, a University Dean, a painter-musician and an Army major.

How does the Respira Labs’ technology work?

We use a patented technology that analyzes resonance to detect changes in air volumes in real-time. We take off-the-shelf components, place them in a wearable patch and use a smart phone to transform the resonance indices into lung data. With AI, we believe we can predict when a COPD attack is about to happen. We start clinical trials next year.

With COPD, is there a critical unmet need for this type of device?

The unmet need is huge. Chronic lower respiratory diseases are predicted to be the leading cause of death by 2030. With COVID-19, that timeline has accelerated. In the case of COPD, 30M Americans are affected and only half know they have it. We still rely on diagnostic technologies that are 50 years old. There is little innovation around COPD. My grandmother died needlessly because of this lack of innovation. With COPD, it is hard to delineate between a good and a bad day; it evolves over time. The standard tool is a pulse-oximeter, which is highly inaccurate when the person using it is moving around. When a COPD sufferer notices that breathing is becoming difficult (iI.e. their oxygen levels are low) they need a prompt medical intervention, but it’s already late in the game.  Therefore doctors hospitalize them to get a better picture of how their lungs are working. Their methodology is to use a questionnaire e.g. “Are you feeling short of breath?” Doctors like myself need to better assess the condition, using quantitative data that is less prone to subjective bias and confounders. With Respira Labs, I am trying to detect changes in volumes of air in the lung in real-time and in a minimally invasively manner.

What is trapped air?

When a patient has COPD, their lungs work poorly as they inhale and exhale. The lung underperforms and air becomes trapped inside. Because they retain CO2, we can calculate changes the resonance inside the thoracic cavity  (CO2 has more mass than O2).

How important is it to have advance knowledge that a COPD exacerbation is about to happen?

Pulmonologists need to be able to diagnose an exacerbation earlier. Prompt intervention allows the COPD sufferer to use rescue inhalers or start nebulization sooner.  In that case, 80% of exacerbations would be treatable at home. COVID has hastened the adoption of telehealth so doctors can treat COPD patients at home and avoid hospitalization if they are stable.

What is Respira Labs value proposition?

It’s better quality of life and lower healthcare expenses. The average hospitalization for COPD can reach $40,000/patient for a 4- 5-day stay. Sylvee will be superior to existing remote lung function monitoring solutions in its: 1) Cost-effectiveness, because of the low cost of components. ($25 at large scale), 2) Comfort and ease of use. (It is non-invasive and requires minimal user manipulation. The patient can change it every two weeks) and 3) Potential to predict an acute respiratory crisis. (No other in-home device can accomplish this.)

Tell us about your latest milestones and progress.

In August 2020, our U.S. patent was granted less than 1 year after filing. We also received a $350K NIH grant of non-dilutive funding and, starting in October 2020; we will be fielding a clinical study at UCSF.  I also received 3rd prize ($25K) in CISCO’s Global Problem Solver Competition; there were 524 applications overall and the top three received cash prizes.  The fundraising bar during these COVID times is higher, so I value these grants and cash prizes.

The obvious question to be posed concerns the pandemic. Could your technology be used to monitor COVID patients?

It is a definite option and we are considering it. The technology could be directly applicable, but we don’t want to lose focus on COPD. COVID survivors have a 40% chance of developing pulmonary fibrosis, an irreversible disease that behaves much like COPD in the long term. Because of this, we think we could get Emergency Use Authorization (EUA) and a Breakthrough Device Designation next year.

What has been your most difficult challenge to date?

Since I am a first-time founder, I initially had to establish my credibility. Most founders are male, engineers and have networked connections.  I am a doctor and because I am different (Latina, female and an immigrant from South America), I had to first prove myself, get into accelerators, and validate myself with my peers. Now people believe in me. As an immigrant and a woman, I have had to work 3x times harder to prove my value. My persistence and hard work have accomplished this.

Speaking of accelerators, what programs have been most helpful to you?

There are four programs that have been key to Respira’s and my success:

What advice would you give to other first-time founders?

I offer three suggestions that were particularly valuable for me:

What is your ask to our medtech community?

I will be raising initial seed funding late this year and in early 2021. I look forward to meeting interested investors and appreciate the introductions.

Maria Artunduaga, Respira Labs Founder and CEO. Maria Artunduaga is a multi-awarded, Harvard-trained scientist, physician and inventor with 18+ years’ clinical, research and medical technology experience, who led NIH- and Gates-funded diagnostics and devices projects. She completed a post-doctoral research fellowship at Harvard Medical School, trained in plastic surgery at UChicago and finished two master’s degrees: in Public Health from UWashington and in Translational Medicine from UCSF and UC Berkeley. Her work was published in the New England Journal of Medicine (first author) and Nature. Her extensive training enables her to wear many hats:  study design, quantitative and qualitative data analysis, research trials, digital health applications, IP development, regulatory affairs, market research, business and academic-corporate partnerships. She has secured nearly $1M in scholarships, grants and fellowships. A former Colombia Presidential and National Merit scholar, she supports initiatives that aid women, immigrants, and racial minorities in STEM and entrepreneurship across the globe. For information, visit Respira Labs.

California Life Science Institute (CLSI) Known as the innovation arm of the California Life Science Association, the South San Francisco-based CLSI manages the FAST Advisory and Startup Accelerator Programs, which provide select life science startup entrepreneurs with intensive team review and coaching from a network of 425+ industry veterans. A 12- week program is run in spring and fall each year. Since participating in FAST, 73 companies have raised over $1.25 billion and created 460 new jobs, more than tripling their workforce. Twenty-seven of these companies have secured Series A investments, 17 have concluded strategic partnerships and six have successfully exited. Since 2017, nearly 50% of participating startups have been female founded and nearly 50% of the advisors have been female. For information, visit CLSI FAST Program.

I welcome your thoughts and collaboration, please reach out to me at [email protected]